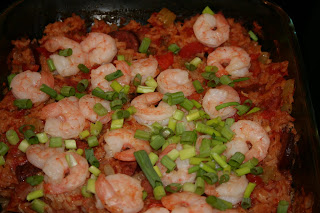 I made this recipe for Freezer Cooking Days, but I’m not sure how well it will freeze.  The cost to make this dish was approximately $10.  Just over 1/2 that was for the shrimp.  It came out yummy last night, but I’ll have to report back next month to let you know how well it froze.  Splitting into 2 dinners makes it more cost effective since I strive for meals that are $5 or less.  My typical freezer meals cost $5-$6 and are spit into two dinners.

HEAT oil in large skillet over medium-high heat until hot.  Add ham and sausage.  Cook and stir 5 minutes or until sausage is lightly browned on both sides.  Remove from skillet and place in prepared dish.  Place onion, bell pepper, celery and garlic in same skillet; cook and stir 3 minutes.  Add to sausage mixture.

COMBINE tomatoes with juice, broth, rice, Worcestershire, thyme, salt and pepper and red peppers in the same skillet; bring to a boil over high heat.  Reduce heat to low and simmer 3 minutes.  Pour over sausage mixture and stir until combined.

COVER tightly with foil and bake 45 minutes or until rice is almost tender.  Remove from oven; place shrimp on top of rice mixture.  Bake, uncovered, 10 minutes or until shrimp are pink and opaque.  Garnish with chives, if desired.

I split into a separate dish for freezing after cooking.  My family isn’t into green peppers, so I omitted those. I used an entire package of sausage and less ham.  I also used homemade chicken stock.

The Jambalaya froze okay.  It still tasted good but it was definitely better the first time.  I think it had more to do with the shrimp just weren’t quite right after being cooked, frozen then reheated.  You can freeze this recipe, but you’re better off enjoying it the first time around or as leftovers.